Check out the (belated) results from the recent “Harry’s Paddle” SUP Race, which was won by Beau O’Brian and Neelie Brown. The inaugural Harry’s Paddle, a charity event, was held in Newcastle, Australia a couple of weeks back and drew a determined field of local and interstate paddlers. The 2014 edition has already been pencilled in on the SUP Race Calendar and is set to be a big event, so keep your eye out for Harry’s Paddle next year.

In the meantime you can see the full race results plus some pics of the action below.

Beau O’Brian is one of the most under rated paddlers going around. Based on his form so far this year, I predict you’ll see his name on the podium at some of the big international races in 2013. Beau started the year with a string of runner-up finishes to the on-fire Travis Grant, with the pair going 1-2 at The Doctor, the 12 Towers as well as the recent King of the Harbour in New Zealand.

All pics © Susannah Teng (view the full gallery on Facebook) 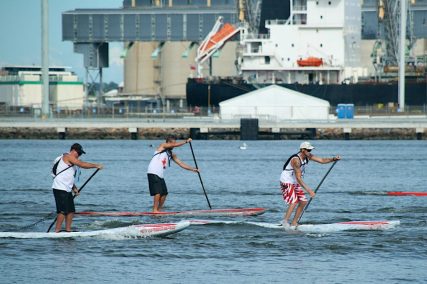