After the virtual lay day we had yesterday (when extreme fog put the event on hold for hours) today’s action kicked off on time here in Miraflores, Peru. The SUP surfing event ran all morning and then it was over to the SUP racing, with the qualifying heats of the men’s Technical Course race hitting the water in the early afternoon.

With chunky, solid waves rolling through La Pampilla Beach, the top 12 survivors from each heat booked their spot in Saturday’s Final, while the unlucky losers were sent home. The favourites all went through unscathed, but there were also a couple of dark horses that stood up and showed they’re contenders.

Young gun Dylan Frick from South Africa went out super hard in the opening heat and held a good lead over 12x World Champ Jamie Mitchell, with Fernando Stalla keeping pace despite paddling with a lucha libre mask. Fernando, who was also pushing hard and clearly wanted to have the winning beach interview, put his foot down and overcame Dylan mid-race. With Jamie cruising it looked to be all Mexico, but the South African made a late surge, got some good outside waves and hit the beach in equal first. A sprint to the line gave Fernando the edge, but Dylan’s 2nd place definitely didn’t go unnoticed.

Another great performance came from the UK’s Ollie Shilston, a bit of an unknown quantity here at this event who stuck with the leaders for much of the race, before finishing 5th right behind Eric Terrien.

In heat #2 it was Kelly Margetts of Australia, Paul Jackson of New Zealand and Casper Steinfath of Denmark who controlled the opening half of the race. Some bomb sets were starting to come through and mix things up, with the back-markers struggling and the leaders pulling away (just wait for the photos..!).

At one point Casper snuck onto the set of the day from right out the back and in doing so opened up a huge gap. The Silver Medallist from Tuesday’s Distance Race showed his surfing prowess by holding the wave all the way to the inside (Casper had actually been competing in the SUP Surfing event earlier today). He was eventually caught and overtaken by Kelly and Jacko, with the young Dane taking some uncharacteristic falls on the inside of the final lap. The leaders also had some company in the form of local dark horse Tamil Martino, with the Peruvian competitor putting on a show for the home crowd and crossing the line in third. But today’s race was really just a warm up for the top guys. All they had to do was avoid the carnage and they knew they’d be in Saturday’s final. The real action was happening further back in the field, with some exciting battles for the final qualification spot. You can check out who made the cut below and we’ll have official results up shortly.

The heats for the women were supposed to follow the men, but with a building swell and consistent, overhead sets rolling through the course the organisers decided to postpone until tomorrow.

That means Friday will see the women’s SUP Tech Race heats, the finals of the Prone Tech Race, as well as plenty more SUP surfing. The action kicks off at 7:40am local time Friday morning and we’ll stream the LIVE WEBCAST here on SUPracer.com, but in the meantime check out the results from today’s SUP races plus some cool pics of the action…

>>> Be watching from 7:40am Peru time on Friday morning for the LIVE WEBCAST 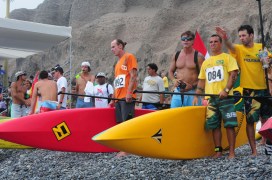