It’s not every day you can say you paddled around The World, but last week Jamie Mitchell and I did just that.

It all started when we were in the United Arab Emirates for the Abu Dhabi All-Stars Invitational event. 10 Days In The Desert included a few days in Abu Dhabi and a couple at the Wadi Adventure wave pool. But after that we were free to explore, and what could be more fun to explore than the entire world?

After the All-Stars event wrapped up, Jamie and I headed for the giant playground that is Dubai. We had four days to kill in one of the whackiest places you could imagine, but after a couple of days enjoying the sights, the tastes and the interesting nightlife the city had to offer, all we wanted to do was go for a paddle.

We were itching for an adventure in the ocean… and it wasn’t hard to choose a course.

I first heard about “The World” islands back when they were still being built. The whole concept has always fascinated me.

Ten years ago, the ruler of Dubai had an idea: Take a slice of empty ocean and create an archipelago, shaped like the world, out of nothing. And as is the way in this part of the world, that wild idea soon became reality. This sums up Dubai for me: A bizarre, crazy, whacky, amazing, and in a certain way, a beautiful man-made oasis in the desert. Satellite view of “The World” islands. The circle around the outside is the giant, never-ending rock wall that we encountered…

Seen from above, “The World” islands are very impressive: You can clearly see a map of the world sitting in the ocean just off the coast. The shape isn’t totally perfect, partly because the bigger countries are split into several islands (though they just plain butchered Australia…) but either way it’s a pretty cool sight.

So when it came time to choose an adventure in Dubai, the choice was pretty easy: We had to paddle around The World. Just saying it got us all excited: Paddling around the world… But instead of 80 days we planned on doing it in a few hours.

We weren’t the first to do it, with plenty of locals having made the journey already (there’s even been a race or two around the islands). So we had some local knowledge on what to expect: It’s hot, it’s long, and it’s going to take ages to finish… take lots of water. Oh and you can’t go onto the islands either, you’ve gotta stay outside the rock wall that encircles The World.

We got partly lucky with the day we chose: It wasn’t super hot, i.e. it was only mid 30’s instead of mid 40’s (or for our American friends: it was “only” 95 instead of 115). But we certainly didn’t get lucky with the time we chose: We headed off just after 11, which meant we’d be paddling right when the sun was highest, hottest and most draining. And we had a good four or five hours of paddling in front of us…

The course was pretty straight forward: Head four kilometres off the coast, more or less aiming for Antarctica, take an anti-clockwise course up past Australia and New Zealand, then round Japan, Russia, Europe and come back down along the West coast of the Americas. Easy. There was only one snag: There’s a massive rock wall surrounding the entire world. There are half a dozen harbour entrances for boats, but there’s security guarding all of those entrance and you’ve gotta have written permission to get through. However this was a very last minute trip and I’ve never been a big fan of bureaucracy. So we winged it.

Brief history lesson: The World islands, which were designed as a mega-luxury, over-the-top haven for millionaires, are basically sitting in limbo. The global financial crisis hit Dubai hard right after the last grains of sand were dredged up out of the ocean in early 2008. As a result, the entire archipelago lays empty except for one single island (I think it’s the island of North-West Greenland) that contains the ruler of Dubai’s show home. “The World” has basically become a collection of small desert islands sitting four k’s off the coast. Quite a sight, and quite a novelty.

If we wanted to get close to the islands we were going to have to sneak in to the world somehow. In the end that turned out to be relatively straightforward: The security boats were patrolling the entrances, which is the only spot boats can come or go. But they weren’t patrolling the shallow rock wall at the bottom of The World, because they weren’t expecting anyone to paddle into The World… So as we set our course towards Antarctica, slipped over a shallow part of the smaller rock wall that protects the bottom of The World, and then we headed for land. We rounded Antarctica (minus the icebergs) and headed up the Great Southern Ocean towards Australia.

The whole place had an eery feel to it. It was like paddling through a ghost town, except it wasn’t a town, it was the entire world.

The World is empty, barren and quiet. It’s also magnificent, in its own certain way. Paddling past the islands, I couldn’t help but marvel at how this ridiculous idea actually came to fruition. The entire project is an amazing achievement, even if it is laying in a coma right now.

(…and just to make the setting even more impressive, we could also see the magnificent Dubai city skyline behind us on the coast, including the tallest building on earth, the Burj Khalifa)

We paddled up the East Coast and made landfall somewhere on the island of Eastern Australia. Surveying the map later, we realised that we were quite possibly standing right where the Gold Coast would be, which is the home of both Jamie Mitchell and myself. We hadn’t planned where we were going to land, in fact we hadn’t planned on landing at all. We just winged it and got lucky by setting foot on the sand (not many people get to come ashore on these islands). The fact we were standing on a miniature version of our home country was a surprise bonus.

After posing for a few pictures (including planting our paddles as if they were flags, and thereby claiming the barren land in the name of Quickblade Paddles) we took off again. We were only one hour into the journey and there were a good three or four more still to come. But at least it was an easy paddle; despite the wind picking up, the massive, outer rock-wall on top of The World (which is designed to protect the islands from storm swells and erosion) was giving us safe harbour and protecting us from an upwind paddle.

But then, suddenly, it all went a bit wrong… Captain Cook’s got nothing on the 10x World Champ: Jamie Mitchell triumphantly claims the island of Eastern Australia in the name of Quickblade Paddles.

As soon as we set sail from Australia we saw a rather large boat speeding towards us. As it got closer, we saw that it was emblazoned with the ominous sounding “WORLD SECURITY”. A minute later we were chatting with a couple of uniformed gentlemen who turned out to be quite possibly the most polite security guards ever. Slightly bemused by the sight of two guys Stand Up Paddling around The World, they asked where we were from, what on earth we were doing, and then explained to us that we should kindly leave this area immediately.

Yep, we got kicked out of The World.

I’m not one to argue with someone who works for WORLD SECURITY, so we had no choice but to follow their instructions and head outside the rock wall. That meant we had to paddle away from the deserted, yet novel and mesmerising islands of The World, and also away from our sheltered, windless waters.

So we exited through one of the entrances and continued our circumnavigation on the outside. If we’d known just how far we had left, and the gruelling mind-paddle that was in store for us, we probably would have turned around right there. But for some reason we thought the homeward stretch was just around the corner.

In fact for the next two and a half hours we thought the paddle back to the coast was “just around the corner”, yet each corner we turned around, the outer rock wall that sits on top of The World kept extending into the distance. It was like a labyrinth – I half expected to see David Bowie standing on a paddleboard and juggling a crystal ball as we chugged along.

It’s not that it was bad; I loved every minute of it. The entire paddle was a complete and utter novelty, something that few people will get to experience and that I’m stoked we completed. But it did turn into a serious “mind paddle” about halfway through. It wasn’t particularly taxing on the body – we were hardly going race pace and we had plenty of water with us – it was more the mental aspect.

But eventually we conquered the wall. After capturing a glimpse of land through one of the final entrances and realising we we’d rounded North America, we rounded the final corner and then it was relatively smooth sailing all the way back to shore. Almost there… the final stretch back towards the coast, with the magnificent Burj al Arab in the background.

For the previous three and a half hours, JM had been kindly going slow so that I didn’t get lost somewhere in the Arctic, but on the homeward stretch I finally hit the wall and told him to go ahead alone.

Feeling like I was paddling at about two strokes-per-minute, I finally made it back to the beach, next to the imposing Burj al Arab, with my legs like feeling like jelly and arms like cement.

Jamie finished in about 4 hours 20 minutes and I was another 15 minutes behind. All up we completed 33kms. It was hardly race pace; it was really more of a mental paddle than a physical one. But we made it. We paddled around The World. It was an awesome adventure and one I won’t soon forget. I also realised later that it was, by far, the longest I’ve ever paddled on a SUP.

And just for good measure, we did it all in the intense, draining heat of the Dubai desert… 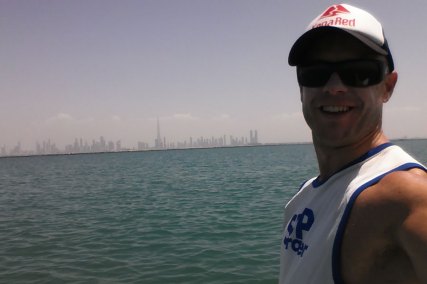 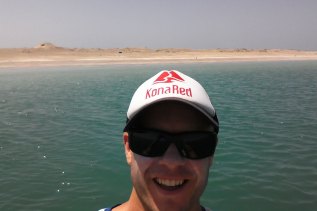 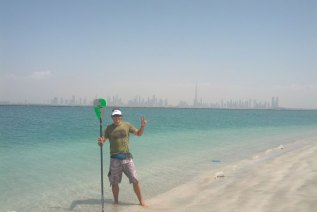 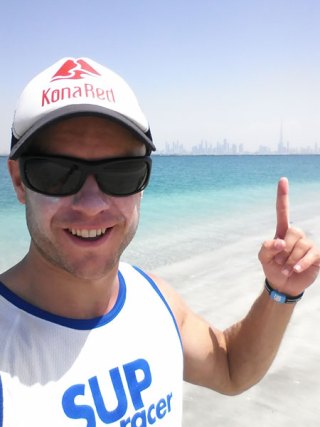 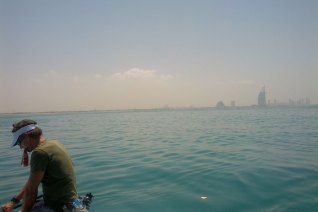 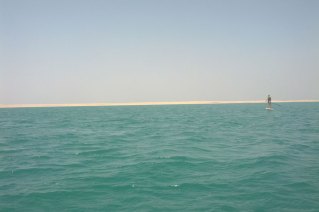 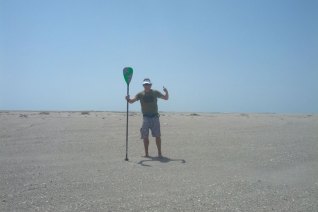 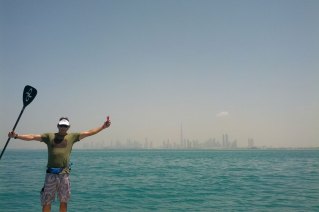 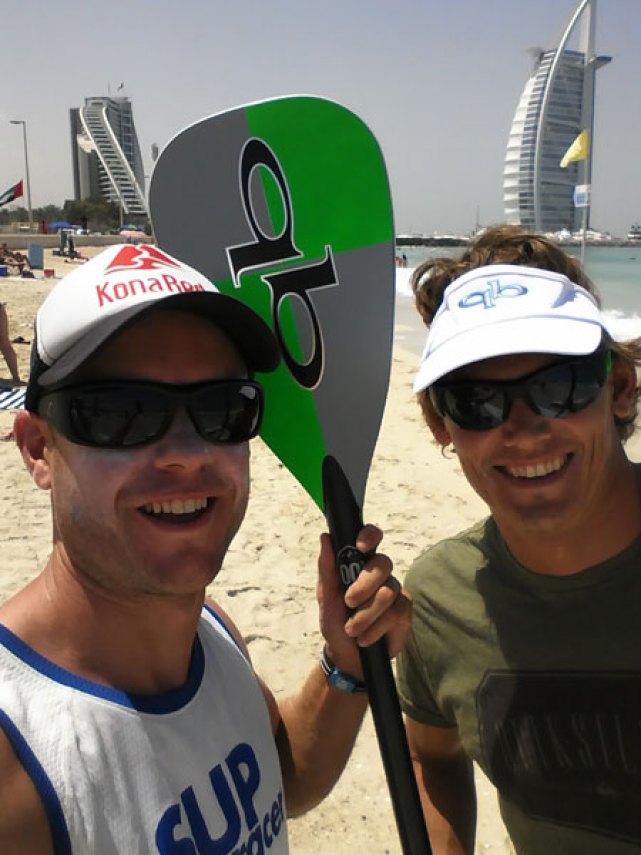