Boss Man’s note: Steve West is back with another great article on the inner workings of Stand Up Paddling. Steve is the author of an awesome new SUP book (Stand Up Paddle: A Paddler’s Guide) and is sharing excerpts from it here on SUPracer.com every week.

So check out the latest instalment below and then grab a copy of the “Bible of SUP”. If you love Stand Up Paddling, you’ll love Steve’s book.

The History & Anatomy Of A SUP Paddle

The chapter in “Stand Up Paddle: A Paddler’s Guide” relating to Paddles, extends over 56 pages, hence this is a mere snippet of it’s overall content. This being said . . . stressing the importance of ‘investing’ in a ‘good’ paddle, is an abstract concept if you have no quantifiable way of judging what this means to you.

Marketing babble-speak accompanying glossy paddle-porn imagery, will on occasion focus in on what is essentially a negative behavioral quality, up-selling it as a positive and revealingly, some confuse terms used to describe the shaft’s flex property at the exit phase of the stroke, labeling it ‘reflex’ when it is in fact ‘recoil’ . . . while it’s argued, ‘use’ is the only way to determine your liking of any particular paddle, this too can be conflicting if you’ve never tried the absolute best, being as you may only be willing to try what you choose to afford. Every paddle has a basic anatomy and is composed of a variety of components, most significantly, blade, shaft and grip. Each element can further be examined in detail to determine its fundamental quality. The sum of the whole of all of these structural elements must ultimately work together. Conflict between these elements and their behaviour will lead to negatives of feel and performance. These can be many and varied.

Blade Performance
A blade can be assessed on five performance criteria; entry, catch, grip, exit and to a lesser extent recovery. This directly translates into the various phases of the paddle stroke. The rigidity of the blade and the degree of flex where the neck joins the shaft and the flex properties of the shaft itself, are all critical factors in ensuring the blade can perform within its limits of design.

The blade, must ‘grip’ the water so an effective pull can be generated, leading to the analogy of the blade acting as an ‘anchor’ in being stationary as the board is pulled up to its level over the water. Importantly, ‘stationary’ is not a relative term. Regardless of blade area, so long as the blade is stationary during the pull (power) phase, blade area only need be of sufficient size to achieve this important ‘moment’ . . . if insufficient compression (power) is given to the blade, it will slip backward on account of uncompressed ‘soft’ water spilling from its edges . . . blade area therefore, need be proportionate to the paddler’s strength, body mass, paddling style (fast or slow stroke rating) and of sufficient area, to offset these loads by way of resistance. Blade areas have greatly reduced in canoe sports from the mid 90s, moving away from the ‘bigger must be better’ theory as experienced with the evolution of outrigger canoe paddles. Surface areas beyond an optimum size, simply adds extra weight and ineffectual surface area which translates into unnecessary resistance and drag, particularly during the exit phase of the stroke . . . the longer lever arm associated with SUP paddles, makes it desirable to lessen blade size and there is a clear shift toward ever decreasing blade width and area.

SUP blade widths (and relatively larger blade areas) originated as a result of outrigger canoe paddle makers (Kialoa, Malama, Quick Blade et al) extending shaft lengths to existing blade widths of 9″ + which have now, in some cases, fallen below 7″ in response to a wide range of factors . . . during the mid nineties, Kialoa produced a very small OC blade area paddle called the ‘Helium’ for downwind solo OC paddlers (now in its SUP range). This was in response to downwind paddler’s demands for higher than average stroke rates as they achieved higher than average speeds assisted by wind / wave power.

Smaller blade areas have led to more aggressive paddling techniques and styles, with higher stroke rates and greater emphasis on power at the front of the stroke . . . compression of water against the blade face is critical to extracting the benefits inherent in smaller blade areas. Some paddlers as they age, may move back to wider, larger blade areas to accommodate a slower stroke rate (as aerobic fitness diminishes).

The larger the surface area of the blade, the greater the drag or resistance at the exit part of the stroke . . . a short blade length; measured from blade tip to the neck, can be exited and re-entered with smaller movements and with less energy expenditure . . . a relatively flat blade surface will also improve exit of the paddle from the water, encouraging water to flow from its surface . . . blade designs which ‘hold’ water as you begin the air transfer phase as associated with some concave blade shapes, can drastically slow your potential stroke rate, sap your energy, negate board glide and make for a laboured ‘feel’. . .

>>> MORE: Check out all of the guest posts about Stand Up Paddling by Steve West
>>> Find out more about Steve’s new book 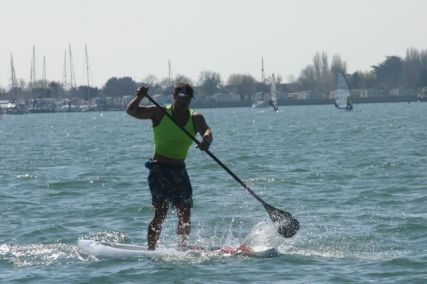 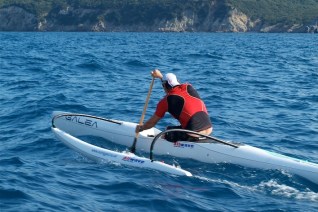 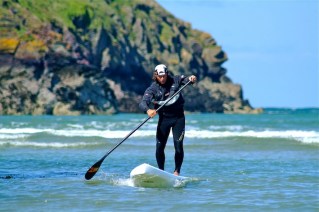 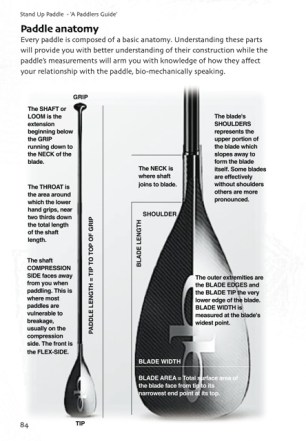 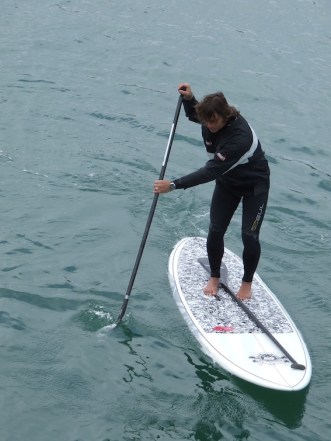