Boss Man’s note: This week we’ve got an excellent and very important guest post from Steve West, author of the Stand Up Paddling book Stand Up Paddle: A Paddler’s Guide.

The issue of board classes and restrictions on SUP race board design has always been a hot topic, so I’m sure this post will stir up some debate. Feel free to leave a comment at the bottom of this post when you’re done reading. We’d love to hear what you think about this one…

You can also check out the previous SUP articles by Steve West or take a closer look at his excellent SUP book (which is recommended by a couple of surfing legends no less).

UPDATE: Below is Part I of the debate and now Part II is available as well.

The Irrationality Of Restricting SUP Race Board Designs…

Steve’s Note: After my previous posts, it’s hard to know where to go from here . . . at this point the book launches into a substantial chapter regarding board designs and the evolution thereof . . . I could skim this and move to the juicy bits concerning paddling techniques and theories and so on . . . but I will press on with following the book as it unfolds.

By example: In the early to mid 90s, when solo ocean racing outrigger canoes were being developed in the hands of early pioneers, beginning with a Tahitian va’a hoe (solo, rudderless, open decked, lagoon outrigger canoe) as a template, one of the most perplexing questions was, what length would be optimum? Starting out at around 27′, designs nudged close down to 18′, but soon leveled out at around 22′ as being near optimum. The early Moloka’i races even included a division for the longer canoes (27′ long boat) and one for the shorter. Though some factions of the community (manufacturers) lobbied relevant governing bodies for the imposition of hull restrictions almost from the outset (counter-evolutionary) common sense ultimately prevailed in what amounted to a paradigm shift in thinking, a philosophical stance if you like, which effectively stated, ‘. . . there should be universal agreement, that no design spec rulings (limitations) be imposed on this new, evolving craft, in which the paddlers in particular, wish to encourage and create a set of circumstances, in which both they and the designers, may pursue extremes of designs in order to create what is possible, not merely conceivable within the parameters of a set of self imposed mathematical presets, which would be perceived as limiting and surplus to what is required for the appropriate evolution of the craft and sport to occur.”

Curiously, those manufacturers who were pro-spec rulings, did so on account of being unable or unwilling to keep pace with the evolution of this new craft, which led to the use of exotic materials, vacuum bagging, oven-curing and more besides. The race was on to produce the fastest, the lightest and the riders all stood to benefit and we did and we continue to do so.

In short, this supports the belief that . . . design rulings (limitations) are at the very core, a poor rationale for the development and evolution of any craft – stand up paddle boards included . . . but the proverbial SUP horse has already bolted, the stable door slammed shut and the key thrown away, and you, the end user, had pretty much no say in the outcome. Ironically, tragically and for no scientific (or hydrodynamic) reason whatsoever, 12’6″ exists on account of what was once the maximum length of a foam blank a shaper could lay their hands on and 14′ on account of prone paddle board racing in California, introducing this size in early 2000 in what affectionately and confusingly became termed as ‘stock’ as if they were available at K-Mart.

These lengths have no bearing on ‘optimums’ relating to performance whatsoever . . . the irony now is that there is seemingly a back-lash against unlimited boards, as if they are a pox on the sport, being hard to store, transport and doubtless use up too much space in someone’s shop –  a  complacent view, given that if this attitude was taken with the evolution of OC1 or Surf Ski race designs, these sports would never evolved without restraint, but as it turns out, they are fit for purpose and with no limits imposed, they remain two of the fastest human powered craft on the planet when paddled downwind in open ocean.

Imposition of design rules (in the context of racing) is central to the Eurocentric condition. As I once famously or infamously wrote in the context of the evolution of the outrigger canoe, “During the thousands of years of architectural evolution of the va’a, the Polynesians weren’t limited by specifications of length, width, curvatures and weight and only the village idiot would have suggested such an imposition.”

Mathematical limits once established, inevitably lead to a retardation of design through the safeguarding of fairness across socio-economic status or levels of sponsorship. But we could and already do argue fairness on the basis of at least some other factors in creating divisions, sometimes of age, of which I once heard at the University of Hawai’i at a seminar in 1995, “Old paddlers don’t retire, they simply create new age divisions” and certainly gender, but why not body mass as an obvious criteria. In 2004, we had our first stand up paddle entrant in the Moloka’i to O’ahu race. In 2008 our first BOP races commenced . . . incredulously, in 2008 when a saw (yes a saw, of the hacking kind) was being taken to boards in shortening them to ‘regulation length’ did it not cross anyone’s mind that the water line length was the primary significant issue, if concerned about fairness in having a longer or shorter board than the next person.

In some sense, this singular act was representative of the blindingly obvious disconnect between how a surf board designer understands the underside of a surf board (let alone a race director) as merely its ‘bottom or ‘underside’ in stark contrast to how a canoe or kayak designer of racing craft, understands ‘hull design’ and all of its complexities regarding hull speeds, displacement, water line length, glide and very much more.

Races . . . through any shore-break, present a self governing limitation on board design, with or without the intervention of rule makers. Try taking a 16′ board out through a sizeable shore-break and you’ll get the picture, because for any given day, only a limited number of board designs will be ‘ideal’. Downwind racing favours the longer board. Long distance, flat water racing, already evolving on lakes, river and dams, also lends itself to the longer, sleeker board, certainly greater than 14′ if we want to get technical about water line lengths, glide factors and so on.

In short, why impose any length rulings whatsoever? In this way paddlers of all sizes can ultimately compete on equal footings, given that they may choose a board length and design which suits them and the conditions, not that which suits race directors, manufacturers, retailers or their sponsors or even the airlines come to that.

We cannot on the one hand declare a SUP race board is very much more than an overblown surfboard, impose rulings on lengths and then disregard the reasons for doing so . . . which should be centred on hydro-dynamic principals that the longer the water line length (in contact with the water) the faster the potential hull speed, but it appears even this isn’t the reason why, because boards are not currently measured at the water line?

The only place where design limitations should or could be considered ‘fair’ and reasonable, may well be at that point where sprint racing on static water becomes serious and where all paddlers should conceivably be on (near) identical boards.

Of course much of this is now academic, but we should remain unconvinced by the rationale that’s been imposed on bringing about the current length rulings. At days end, there are enough rules and regulations in our everyday lives, without perhaps having them imposed on something which should free us from these pressures and restraints, permitting freedom of choice and the exercising of free-will amongst designers and riders, so as we may enjoy the ride toward what’s possible, not merely permissible.

UPDATE: This article was only Part I of the debate. Part II is available as well, so go check it out for more insights from Steve. 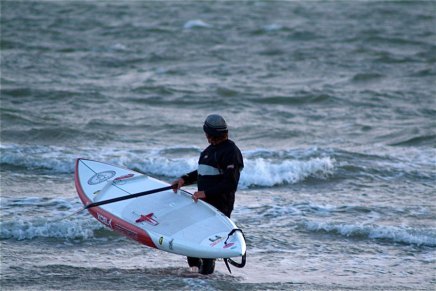 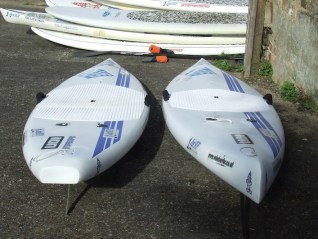 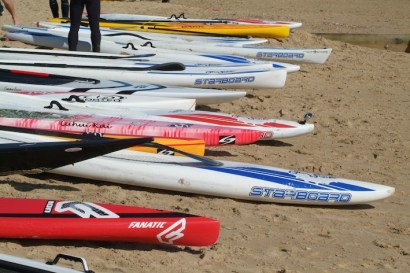 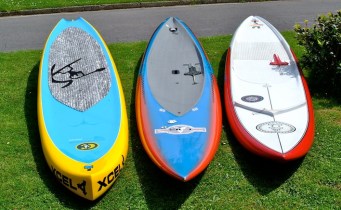